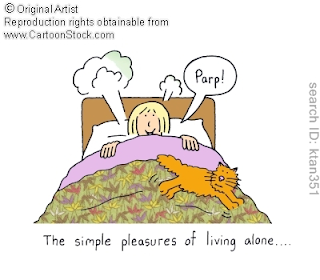 
Tell me what it is that you cherish about your single lifestyle.


Everyone knows that when you’re a couple…you adapt and compromise your spatial habits. You choose a “side” of the bed. You alternate shower times (save for the showers together). You share groceries, learning to leave what they like and vice versa.


The toothpaste dilemma…squeeze at the bottom or in the middle?
Who takes out the garbage?
Does the dishes?
The cooking?


Those are some basic shared living experiences (or in some cases…visitation etiquette for those who refuse to shack up)…but, what about…


~farting passing gas/pooping…free to be stank. lmao
~enjoying a day off…no comb in sight
~eating garlicky food and not worrying that someone wants a kiss
~wearing mis-matched, somewhat frumpy clothing on leisure days


I mean, let’s face it…when you’re single…outside of a daily shower and a gargle, a day off can mean naps or a disheveled weave…combined with some eye gunk from interim snoozes between TV/movie/Internet action…you don’t have to do anything. 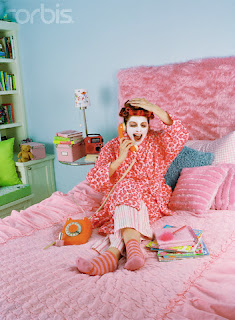 Sure, I maintain ME without a man around for my own personal pleasure…but, some days you just wanna say “Bump a shave…” LOL


Ladies…tell me what it is that you miss about being single when you’re coupled up. I can give you a Santa’s scrolled list of shit I miss about being in a couple…but, like “they” say, “You don’t know what you’ve got til it’s gone…” Perhaps, I’ll cherish this alone time until/if God brings my king…

Here’s a word or two to the not-so-wise. The “wise” don’t NEED a word…so riddle me that. I digress…my apologies.

Marriage…is for the marriage-minded. Need a clue? Well, the marriage-minded are in the state of marriage before they ever enter and say “I do’s”. The ceremony and license are just that…ceremonial. It’s the religious or social declaration of commitment ALREADY present. One day on Twitter, I saw a quote that @RevRunWisdom tweeted. He said, {loosely translated} that if a woman wanted to BE a wife, she had to be one before even being proposed to. To be in the mind state…is the key. So, if you’re considering marriage…yet, you’re still “pitching woo” to others, needing and meeting others of the opposite sex for “friends” and haven’t shed the so-called freedom that so many cling to…you are NOT marriage-minded. Marriage is not for the selfish. It is for those prepared and EAGER to begin a life with someone who they not only can live with…but can’t live…WONT live without. I said the other day…fighting = sacrifice. When you fight for love, you fight for it sacrificing the things you THINK you need for the one thing you KNOW you need. For me, truest freedom is found in a true love where you can be yourself. You don’t have to hide your weaknesses. You don’t have to build yourself up. You are from the nucleus of you…everything you are and aren’t. You are that without apologies when with someone who sees you and loves you…regardless. Marriage-minded people, understand that friends/associates come and go…and that the true ones will support your step towards marriage. They will RESPECT your union and support your union. After all…I don’t think married folks mingle well with single ones. Unless you as a married person have single friends who love you as a unit…there could be drama and circumstances that may leave you in temptation or make you feel the need to “prove” who you are.

Single…is for the single-minded. It’s when you’re okay with being single and are not looking for commitment. It’s also a game that should only be played by the honest. Single people tell other single people, that they don’t want anything more than to date, have sex, or other activities that don’t require being coupled up. Single, is EVEN quite possibly…having an exclusive “partner” but not putting labels or expectations onto the relationship. As any situation grows and changes…the parties involved should be honest about their intentions, change of heart and/or growing attachments. If you’re sleeping with more than one…say that. When you lie to someone about your interactions, you’re robbing them blindly of the choice to invest in you or not. SOME folks are game to do whatever…as long as there is honesty. If someone chooses to walk away, that is their right…but holding on to “prospects” for future marriage/commitment…is selfish and a flagrant violation of their trust.

If you’re not ready to be honest with your partner, put in the time to bring about a unified sense of intimacy, and have no intentions on following through with promises of monogamy, etc…you need to be single. If your thoughts are you first, and your mate AFTER the fact…you need to be single. If you’re loving one person, finessing another, romancing another, making plans to kick it with the next…you need to be single. I have had married people tell me that their mate is their ace. They have LOADS of fun, great sex and good communication. They work together like a Swiss timepiece…ticking in sync, on the moment with accuracy and grace.  Marriage is NOT the end…if you’ve chosen the right mate. One who is compatible to you…who is down to have fun with you and give you the freedom to be true to self. If you’re using past experiences to hesitate towards true vulnerability, trust and communication…you are indeed swinging what is called “baggage”. Work that out before you couple up and start waltzing toward, around, near but never AT the altar. All marriages aren’t good ones, otherwise there would be few to no divorces, but it takes work from two willing participants…committed and unified in the choice to be together for their life’s span.

Again, honesty is the best policy…and remember…what is done in the dark comes to the light. NEVER be so confident you’re flying under the radar that no one can find out what you’re up to…because {and this is that word to the not-so-wise}…if you’re doing things surreptitiously, dubiously, sneakily, with the hopes of getting away with something…you need not be doing it and need to be SINGLE. Free yourself and be honest…and you could live freely to do what it is you like. Marriage and single hood…is a mind set. Where is your mind at? If it’s in the clouds and you think you’re not noticeable to those around you…remember…while your head may be in the clouds out of sight, your body is still earth bound and bare to the eye. You’re not hiding from anyone but yourself…and that is the saddest part of all.