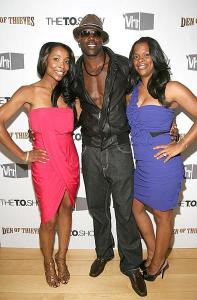 Last night I watched a little bit of “The T.O. Show” on VH1 and was shaking my head a little…well, a lot. If you don’t know, the T.O. is for Terrell Owens and he’s got his two friends as his PR’s…or did they become friends after they took him on as a client? Oh, who gives a damn…anyway…these chicks are funny.

Now, the reason I’m writing on these folks is because I had a couple of questions based on the show’s last episode. Picture it: Moe is getting re-married and Kita throws her a bachelorette party. T.O. gives Kita his credit card for Kita to pay for the festivities. Firstly, knowing that Kita would bring Moe to the Palms…T.O. shows up with Moe’s husband and proceeds to entertain him across the pool in her eyesight while other women dance on him. Can someone say, “Incite a Black Woman 101”? *EPIC FAIL* Then the ladies proceed to go the hotel room where they have a pole dancing instructor to come in and teach the ladies how to pole dance. *sidebar* That chick was RIDICULOUS! She was swinging on the pole…hanging from her toes, looking something like a flag with this one trick where she’s virtually floating in mid-air. *back to the blog* SO, after those feats of gymnastic impossibility…in comes the obligatory police officer with the warning of noise violations. Moe already knows the drill because she hired him herself! Now, while Moe is having fun with Officer Friendly Pants…Kita is blocking. She’s getting in between Moe and the stripper, saying how it’s tacky. The girls are holding her down so Moe can get her lawful grind on…when BLAM! T.O. shows up with the whole bachelor party. Moe’s husband is now seeing his wife sitting in a chair while a half naked man is giving her a whiff of his sac. Yet, this “visit” is because moments before…T.O. was tipped off by the hotel concierge that the bill was up and towards the tune of $15,000. *pause* Now, people…remember that T.O. handed his credit card to Kita. Did he give her a spending limit? (not on camera he didn’t) So, why is this man…who just dropped almost $200k on a chain not too long ago concerned about money he can wipe his ass with? WHY is he kicking the door in on this bachelorette party? (Is this reality drama provided by producers? “No, don’t wait Terrell…do it now…for the cameras”) I mean, he couldn’t pull Kita to the side and ask her what the financial FLUCK was going on with the tab? Why crash AND end the party? So ONE of my questions is, “Was he being a cheapskate?”. These two women work for him and are probably the reason he’s making a reality show, since most people could care less what the hell he’s doing…so, if you handed your plastic to a chick and said, “Here…I’ll pay for it”…should you have not been clear as to limits and what not? My girl says it’s different when someone else is spending your money…but, then you shouldn’t hand over your credit card to a woman planning a party. *EPIC FAIL*

NOW…here’s the kicker question. How do you feel about this scenario?

You already read that Kita was hating on Moe’s stripper. Didn’t think it was classy. (My girl Renee, says that it could’ve been for career concerns since they’re business women and on TV) Now, after T.O. kicks the door in on the bash and invites the ladies to combine parties…they are all eating at a table. Kita decides then, in front of everyone to say that Moe’s stripper was tacky. Moe asks if Kita is saying SHE is tacky? Of course, Ms Smart Ass says,”Well you said it not me.” They begin to argue and Kita does indeed call her tacky among other things…and Moe gets upset as well citing her friend as a hater who is jealous of her wedding. Well, it all leads to Moe finally asking to speak to Kita alone and telling her of how she didn’t appreciate being considered tacky…and especially not in front of folks. She took it as a personal affront to herself and the friendship and after saying how she felt, with Kita refusing to admit wrongdoing…Moe ordered her out of her wedding. *EPIC FAIL* T to the O to the rescure…yea, I said rescure. He wants to know what’s going on and she says she’s gone and leaves Las Vegas. Did yall get that?

I personally think that Kita is in secretly in love with T.O., I think she is slightly jealous of Moe’s nuptials…and I do believe that in spite of how a bachelor/bachelorette party is “supposed” to go…the nastypants dancer could’ve come off a little classless for their combined business on TV. I’ve been seriously reconsidering my guilty pleasure…reality tv. At least not the ones where my people look a monkey doodle fool for America…as if we need ANY help there. *quietly turning from Real Chance of Love 2*

Here’s the episode…see for yourselves.