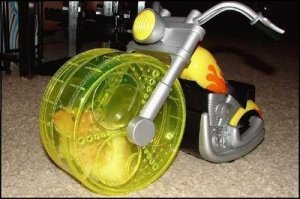 Round and round. I can feel the wheel squeaking…and the dizzying, not of the turning…but of the blinding vision of things quickly moving ahead, but only in repetition…so there’s no relief. A cycling of the same emotions, attempts, and outcomes. YEARS of doing what I was supposed to and constantly being denied…looked upon almost pathetically as if my request was too much or unreasonable. Why is it because people can’t SEE what’s wrong…they think there’s nothing there?

I know I’m speaking in vague terms and other than the “gist” you don’t get it…but, I need to speak it or else I’m gonna bite a brick! I’ve been going through the same thing for so long with no relief in sight…and it’s weighing on me. Not just the answers or lack thereof that I’ve been getting…or not…but the WHOLE enchilada. The insensitivity, the robotic protocol, the callous hand-waving attitude towards my situation. The inevitable outcome of being totally denied and left floundering. This indeed is one of those moments when I prefer to go back and change things…and that’s saying a lot for me because I believe deeply in the concept of ‘what happens happened for intent purpose”. Yet, I wonder what I could’ve done differently to garner a different outcome. What is the lesson? I’m finding the lesson deeply hidden. It’s like reaching your hand into a dark space, not knowing if your hand will get severed or if you’ll place hand on something and retrieve a goody.

All I’ve ever wanted was my “lot in life”…not to be given more than what was due me…but just exactly what I deserve…what’s mine. So that begs to question…AM I asking too much? Who is to say what someone else’s “lot” in life is…and perhaps those who accept mediocrity and tragedy as their existence are onto something. Maybe I should just throw in the towel on this hamster wheel I’m running. Maybe I should quit running in circles and figure out how to jimmy this mofo so I can get out. Maybe that’s my problem…I’ve been running fast, going nowhere. It may be time to “give us free”. lol