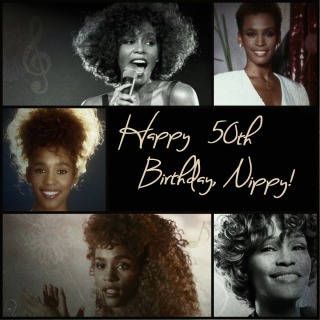 If you guys have been paying attention over the years…you know I love/d me some Whitney. Nippy was the first voice I heard that made me want to buy her album. I got her first album, which was MY first album, when I was 11 or 12. I played the ENTIRE HEYELL out of that album. Miraculously, it didn’t get scratched and start skipping.
*dang…I said “album”…as in VINYL! lol*
Let me take you on a little highlight reel of my life featuring the incomparable Whitney “The Voice” Houston…
I used to sing her debut single, “You Give Good Love” to my first boo. lol That was my SHIT! Nothing was greater than that song, except for when it changes tempo at the break down. YES! I get all of my life with that song.

I can’t hit all the notes anymore, but when I was younger…I could tear it DOWN!

The summer that her second album debuted…I was 13. Yea, things got real that summer. I fell in love with the sophomore album just like I did the first. This time, it was two remakes that held my heart the most. “For the Love of You”, originally by The Isley Brothers and “If You’re Really Ready For Love” by the Manhattans. Don’t get me started on “So Emotional”, “Where Do Broken Hearts Go”, “Where You Are” and the underplayed and underrated, “Love is a Contact Sport”.

Yes, I serenaded the boo with this, too. LOL

I could’ve played it forever…and sometimes, I have me a Whitney day and go hard on those 1st and 2nd albums. lol

When I heard Whitney would be starring in a movie…I was ecstatic. My Whitney…an ACTRESS! Cool, so when’s it coming out? lol

The Bodyguard’s soundtrack was my next purchase…this time on CD. No more vinyl purchases at that point. More so, because I no longer had a working record player. Well, of COURSE I fell in love with “I Will Always Love You” a remake originally by Dolly Parton. Oh, and “Run to You”. Such a beautiful song…but the one I sang constantly that made my mama tell me to shut up one night? “I Have Nothing”…

so…now we start getting into the part of my story that becomes a little more personal and raw.

In 1994 I got into my first REAL relationship…with someone 22 years my senior. We had a tumultuous relationship of the sometimes physical ilk.  He had a tendency to get outta pocket and because my mama ain’t raise no punk, I [after the first slap] got “projects” on his ass. Well, where there’s stress in my life…musical refuge coexists. Our song was off of the “I’m Your Baby Tonight” album. Along with the title cut, “My Name is Not Susan” and a very sweet duet with Stevie Wonder called, “We Didn’t Know”…my favorite…OUR favorite…was, “Lover For Life”.

I remember that on our anniversary, which was November 12th…HBO aired a Whitney Houston concert from South Africa…and Whitney sang this song (which was rarely ever played). A beautiful and serendipitous moment in an overwhelmingly rough time.

Who knew that I’d literally feel like a prisoner in that relationship?

The next level of fuckery was just beyond beyond. I refuse to font it. LOL

I played that song and album ad nauseum. I loved Nippy’s rendition of Stevie’s, “I Was Made To Love Her”.  “If I Told You That”, “Heartbreak Hotel” w/Faith Evans & Kelly Price, and “When You Believe” the song from “The Prince of Egypt” animated movie.

I remember when Whitney began struggling with drugs and infamy. I wanted so badly each time she arose with a new album, for that to be the moment of reckoning. For her to be on top again and clean with the sobriety of her fan’s love. It wasn’t easy watching her fall right into the next scandal trap. Most people wanted to see her fail. The naysayers were rampant…and when she died, the seemed to act in shame and quiet remorse, but the banter began again soon after. Details, presumptions about the way she died, who she was involved with…eh. I suppose it’s all a part of being a public figure. I just wish there was a way to receive the art…the gift from someone…without all of the negativity. Either way, my heart dropped the day I heard the news, same as it did when I heard about Michael Jackson.

You never truly stop missing such mega stars. If the sun died out today, the Earth would die with it…and a lot of people’s earthly love for music dies a little more as these stars leave here.

I still love you Whitney. I get my life EVERY…SINGLE…TIME I hear your music and sing with you.