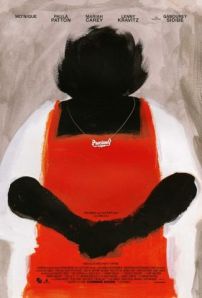 A Saturday in October…I invited my friend Joy to come up where I live and go to the movies with me. Along the day’s planning my mother was invited as well. I let Joy choose the movie…she chose “I Can Do Bad All By Myself”. It wasn’t my first choice, but it was a good movie. I wanted Joy to be happy, so that was all that mattered…she needed cheering…if only by a few hours of being somewhere other than her own 4 walls…so the day was successful if for no other reason than she wasn’t home alone in her thoughts.

The previews set in…I love previews. I love the WHOLE movie experience. I’m not one of those impatient folk who has to see the movie right away and complains that the preview section is too long. HUSH, I say…see what ELSE is coming out! lol. I saw a few movies I want to see…”Couple’s Resort” with Faison Love and Vince Vaughn. “Lovely Bones” a thriller about a little girl’s murder…and Precious, a movie based on the book PUSH by Sapphire. Precious is starring a young lady named Gabourey ‘Gabby’ Sidibe as the entitled character. Her mother is played by Mo’Nique, whose role is CLEARLY against the type she’s expected. Speaking of people stepping out of their type, Mariah Carey plays the dowdy social worker and Lenny Kravitz, has a role as well. I am not sure if it’s his 1st role in a movie, but I know I’ve never seen him in one. Either way, I want to see this story.

This story is ugly…much like the name Precious is called over and over again in the 2 or more minutes of the preview. Not because SHE is ugly, but because the truth of how people are in this world is ugly. I’m sure not every parent is born with the instincts to love, protect, and build healthy people of their children…but to see examples of how wrong that can go is undoubtedly sad. When I saw the preview I cried…because one…I don’t like to see people demeaned, belittled and disgraced. Especially over societal views of what “beautiful” is. Two…growing up, I encountered ridicule from kids and adults, too. I look back at my pictures…and I wasn’t an “ugly” child…so, I don’t know why I was called that. I can only chalk up a lot of the chatter from other things such as skin color. Black-Americans have a negative inner caste system when it comes to skin color. Features play a huge part in the stigmatization of beauty vs ugliness. Flatter noses and thicker lips, regardless of skin tone can be seen as ugly. Still…The light-skinned vs. dark-skinned thing is an issue within our own culture and it shouldn’t be. I’ve been called too light…I’ve been called not light enough, and I suspect that growing up that was one of the components of a building complex I had for a long while. Being “thick” didn’t help. I got picked on incessantly for being weighty. I wasn’t even “fat” per se…but, I was stocky and couldn’t be considered skinny once I hit the 4th or 5th grade. What always knocked people off their square, was seeing how the “big” girl could outrun, catch, snatch AND pass most kids my age. Looks are surely deceiving…but, I digress. I can mostly empathize with the girl in this role. On so many levels she is me…still. Not always knowing your value comes with with the territory of having been taunted about your physical looks. When I was younger my ears were uneven. One stuck out further than the other and I was teased relentlessly about it. GEEZ, did my friends give me hell about that one…a sister and brother especially. I won’t say their names, but if they were to read this…they’d get it. LOL. I’m over it NOW, because…well…I’m FINE! HA! Yet, growing up…a little girl doesn’t know that she’ll be swan fine when all the kids see is an ugly duckling. To this day, I can hear a certain friend of my mother’s calling me that. When she said it out loud to my mother after years of not seeing me, suggesting that I’d “finally” gotten pretty…my mother got defensive. She’d never known that my “aunt” had looked at me as if I weren’t as beautiful as her own daughters. Either way…it confirmed in my being that people were superficial and cruel, and most likely did those things because they themselves didn’t feel adequate. I say that I am still Precious in some ways, because there is a part of MOST people who is affected by the things their loved ones say or don’t say. When starved, you crave…when overfed…you waste. It’s simple. I just hope that with stories like this one…we can push the issues of individual hatred further and further to the back…leaving room for nothing but acceptance of humans as they are.

No one can call me ugly now. I’d laugh in the face of that word. I’m God-made…God-created…God-loved. I don’t need the co-signing of man nor woman nor child to feel beautiful. It took me a long road to get here and I’m sure that when I see the movie “Precious” I will see a little or a lot of myself in it. I’m prepared to cry for her, for me, and for all the women out there who grew up feeling unloved, unwanted, unprotected and purposeless. I’ll be back with a review when I do see it.