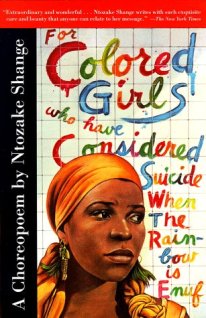 Earlier this evening I had a convo in the inbox on Facebook with a sister~friend of mine. We got into a private discussion about Tyler Perry’s new movie “For Colored Girls” and people’s negative feelings toward the screenplay writer/producer. Well, our “inbox-ersation” as I like to call it…went like this (with the other party’s permission of course):
WARNING: WE GET RAW WITH IT…THIS ISN’T A DAINTY CONVO! Proceed…
ME: November 8 at 7:40pm
GIRL…why did that chick inside of ******’s post on TP’s movie piss me off?

Why do people need to break down successful folk? No…why do BLACK folk have to tear down OTHER successful BLACK folk? Why do people feel that in order to “fairly” judge a situation they have to be HARDER on their own to impress looking eyes. WTF?

HER:
You know I saw your post. And yeah, she pissed me off too. I just didn’t feel like going into depth with her ass like you did.
ME: November 8 at 7:45pm
I’m sick of it. SHE and other women and men like her are the reason why we are still at the bottom of the totem pole in society. It’s downright sickening to see a WOMAN of all people sit there and begrudge a man for portraying us for what the world DOESN’T but NEEDS to see. We black women aren’t evil…we’re fucking tired. We’re tired of being everything to everyone and having NO one appreciate us. We’re sick of being thrown aside for every other color of the rainbow because sensitive ass pussy ass black men want their dick sucked at will rather than their back bone straightened out the way it needs to be. Funny shit? Those White, Latina, Chinese women? They’re doing the same shit to them they claim WE do…they’re just the kind to suck it out of them rather than prop em up, fight for em or take their shit raw on the way out the door to work. Girl, I’m NOT in the fucking mood.
HER: November 8 at 7:47pm
I can tell, Mama. I can tell. But you know there will always be somebody out there that will try to tear their own down.
ME: November 8 at 7:48pm
Yep. Fucking group thinkers…
HER: November 8 at 7:49pm
Exactly. And the wrong kind of group at that.
ME: November 8 at 7:50pm
RIGHT…the hating ass, guilty ass, denying ass, deflecting ass, looking ass negroes who probably need to be paying attention the MOST!
HER: November 8 at 7:53pm
That’s exactly it. I’m sick of people…females especially…that always have something to say without thinking first. Shit, I think some of us are dumb as broken bricks. I know others do.
ME: November 8 at 7:57pm
LMAOOOO DAMN..broken bricks? LMAOOOOOO

Yea, I do think that folks think of us like that. They don’t think of us as intellects. They think of us as emotional and needy. They think we’re the chicks either on the videos or on the ghetto pics on the Internet. We get NO love for being the kind of women who understand the depth of life and love. We get a bad rap…and it’s easy to see why.

HER: November 8 at 7:58pm
Of course it’s easy. I am willing to bet that not too many people with white skin watched “Black Girls Rule” but they stayed glued to “The Housewives of Atlanta.”
ME: November 8 at 8:01pm
*stomping foot* PREACH!!!! You know it. Seeing us in NeNe, Sheree, and Phaedra’s deluded bourgeois-ghetto aka boughetto ass…all the while bypassing any real judgment onto Kim’s hoebag ass.
HER: November 8 at 8:03pm
And do you see how many people are hyping her non-singing ass up like she’s Celine Dion or some shit? And we can’t even back our own brother in the movie theater. For shame.
ME: November 8 at 8:11pm
RIGHT! GIRL. Let me stop before I make myself a fever. lol

I do that…I get riled up and my whole face turns red and my face overheats.  Girl, I get heated…LITERALLY! lol

HER: November 8 at 8:12pm
I do that too when I’m passionate about something. You should go read ******’s comment on the thread, though.
ME: November 8 at 8:15pm
I did, I liked it. I’m glad to see that there are more positive inputs from us women than negative. A few of my friends…can’t stand Tyler Perry…and I quit arguing with them as to why. Their only REAL gripe is that he dresses up as a woman and has latent gay tendencies. NOTHING to do with his contribution to art nor our black community’s gripes.
HER: November 8 at 8:16pm
No one said shit when Patrick Swayze (may God rest his talented soul) did it. People kill me with their double standards.
ME: November 8 at 8:18pm
RIGHT! Everyone want’s to come down on our artistic brothers. Those whose talents cross the lines of “comfort” and go into the portrayal of things to which others are too insecure to do it. They talked shit on Flip Wilson, Eddie Murphy, Martin Lawrence…man. GET OVER IT!
HER: November 8 at 8:20pm
And yet, “Brokeback Mountain” got an Academy Award. GTFOH with that. Not that the movie wasn’t good…it was. But it’s more about acceptance. Aren’t we supposed to be the race of tolerance? Didn’t we put up with more shit than a little bit but yet, still invited others into our world? Man, please…let me stop.
ME: November 8 at 8:23pm
OMG…*rolling around on the floor kicking and screaming…figuratively that is* LMAO

FOR REAL. Two dudes hump in a tent…and that’s ACADEMY AWARD winning shit! Eddie single-handedly portrays 6-7 characters in a movie…and he gets flack for the 2 that are women. O_O

ME: November 8 at 8:24pm
I should make this part of our inbox-ersation a blog. A true back and forth between two intellectual sisters. *changing names to protect the stupid*
HER: November 8 at 8:25pm
OKAY?! Man, folks kill me. Just because someone is secure enough to don a dress has absolutely nothing to do with them as a person. Hell, for the right amount of cash, I’ll put on a suit for a movie and be a man. Even though it wouldn’t cause as much flack.
HER: November 8 at 8:26pm
LOL…sure. Have at it.
So, YEA…that’s how we do it.  LOL

Nothing is more frustrating then people homing in on ONE thing in a multi-faceted situation. Nothing is ALL positive, nor ALL negative. As many abusive, no-good men that were brought to the forefront in Tyler’s movies…there were positive, loving, men showcased as well. All of the women weren’t victims…some were the cause of their own troubles. It’s life. It’s how Jay-Z raps about what he knows, How Biggie rapped on the streets until he got money…then he rapped on money. THAT is what’s happening with Tyler. SCREW who he wants to or likes to screw. I don’t need to know that man’s personal business in order to take something away from his productions. Hell…some folks still LOVE themselves some R. Kelly, even though he’s been accused (and allegedly CAUGHT on tape pissing on and screwing young girls). They’re pumping that new jam RIGHT now.

People…stop being so unbalanced and selective in whom you “judge”. If you’re going to weigh up someone for the skewering…use the same system of measure as you would someone on the opposite end of the spectrum. Live and let live.
It’s okay to STFU sometimes. LMAO