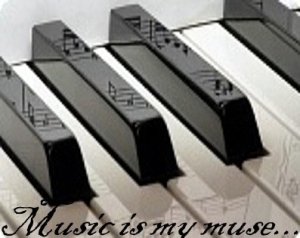 I love music. I absolutely adore beautiful songs, intricately composed ballads and spirit-moving up tempos. I grew up on mom and dad’s music (a combo of Motown, disco and blues). I remember as a kid…sitting intently in front of a radio searching for the perfect song to sing along to. I remember falling in love with the Emotions, EW&F, Stevie, Patti Labelle, Marvin Gaye, Gladys Knight and the Pips, Luther and so many others. I later put names to the groups. Like the Manhattans, Stylistics, Chi-lites, and Atlantic Starr. I had no clue I could sing until my mother busted in on me making up songs while playing with my little people toy set. (LOL) She tried without success for years to get me to step to a mic, but for me music was more about the soothing…the lulling…the world of perfect harmonies and simple melodies. As far as I’m concerned, God gifted me this voice to sing along to beautiful music for my own spiritual comfort.

I love to find all the instruments. I’m listening to a song by Jazmine Sullivan called “Make U Stay” and I hear pianos, some sort of woodwind (a flute, piccolo, oboe or somefin), something that sounds like moraccas even though it might be studio-engineered. I’m still feeling out those background chimes…but, I get totally entrenched in a song. My favorite instruments are percussions with strings and horns following closely behind. I’ve always wanted to play the piano. I still may learn.

Anyway (see how enraptured I become) I’ve been listening to a few select artists lately. I’ve grown tired of cookie cutter beats and producers giving all of their clients the same sounds. I also want to hear some soul in their voices. That’s probably why I’m feeling Jazmine Sullivan right now. I love her sound and her range. She’s only 19 but the potential she holds is phenomenal. I hope Teedra Moses comes out soon…she’s definitely been slept on. Ledisi could also use some shine. I am hoping that Jennifer Hudson continues to rise…her new song, “Spotlight” is one of my faves. I’m even feeling Dear Jayne’s collaboration with the Dream. My boy Raphael Saadiq is coming out soon with a new album (and I also love his “alleged” girlfriend, Joss Stone) For me, good music has no color, gender no genre. I’m tired of hearing MESS! I want to hear quality music. The kind where on tour they’re using BANDS instead of recorded tracks. Beyonce got hip to that…Alicia Keys has been doing it, among others. Artists like Kindred Soul, Ledisi, Amel Larrieux and many other underrated artists should be HOT right now…but, bullshit prevails in an industry where you “get in where you fit in”.

I continue to lobby for good…no GREAT music. I champion for the underdogs of music and hope that those whose passion far outweighs their musical gifts…affords them a chance at recognition for their craft. Music over Mess, ANY DAY!